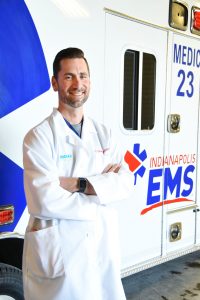 Dr. O’Donnell’s work has had a strong impact in the community beyond EMS. He has been a champion in the fight against the opioid epidemic in Central Indiana through his work with Project POINT, which intervenes to connect overdose patients with addiction and recovery services, and also helps provide and train police officers on Naloxone administration. For these efforts Dr. O’Donnell received the Hulman Health Achievement Award in Medicine and Public Health in 2015.

In 2016, Dr. O’Donnell led an effort that placed more than 70 automatic external defibrillators (AEDs) throughout the city of Indianapolis and delivered training to the public on how to operate them. The effort is aimed at helping to increase the survival rate of people suffering cardiac arrest. In 2018, Dr. O’Donnell was recognized as one of the Indianapolis Business Journal’s Forty under 40.